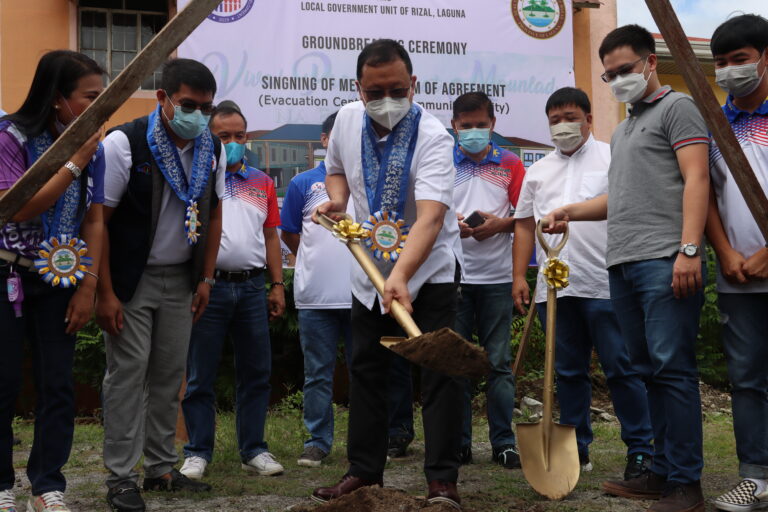 The Department of Human Settlements and Urban Development (DHSUD) continues to boost its grassroots engagement as part of its mandate in providing resilient Filipino communities nationwide – providing financial support to this little-known town’s shelter projects.

DHSUD Secretary Eduardo Del Rosario graced the groundbreaking and Memorandum of Agreement signing ceremonies last February for a community support facility and evacuation center in the municipality of Rizal, a third-class town composed of 11 barangays.

It is the Department’s latest engagement with a local government unit as travel restrictions brought about by the COVID-19 pandemic have eased.

In his message, the housing czar reiterated DHSUD’s commitment in assisting LGUs, particularly third class and remote municipalities like Rizal, in implementing shelter and community-based projects.

“Third-class municipality, kung anong pwedeng tulong na maibibigay ng national government, we are very much willing to be of assistance and make a difference to the lives of Rizaleños,” Secretary Del Rosario stressed.

Witnessing the key event were Rizal Mayor Vener Muñoz and Vice-Mayor Antonio Aurelio, who described the DHSUD chief as a “blessing” and now “part of history” of Rizal for his significant contributions towards the town’s progress.

Secretary Del Rosario cited the persistence of Vice Mayor Aurelio in following up the project proposal that led to the official launch.

Also in attendance were DHSUD Regional Office 4A Director Jann Roby Otero, and former DHSUD Assistant Secretary Leira Buan, who both played a key role in helping turn the projects into reality, as well as representatives from partner developers.

Cementing stronger partnerships with LGUs is one of DHSUD’s key strategies this year. Secretary Del Rosario has repeatedly stressed the need for better coordination with LGUs for the government’s national housing program to become a success.

As the primary government agency in providing decent, safe and affordable housing units, DHSUD is currently scaling up partnerships with LGUs, particularly in the rural areas, to assist in their shelter projects.

Gaining momentum in the 16th Congress

Mass Housing as an Investment Priority