Home » The Government-Led Plunder of the Marikina Watershed 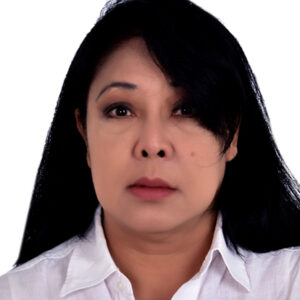 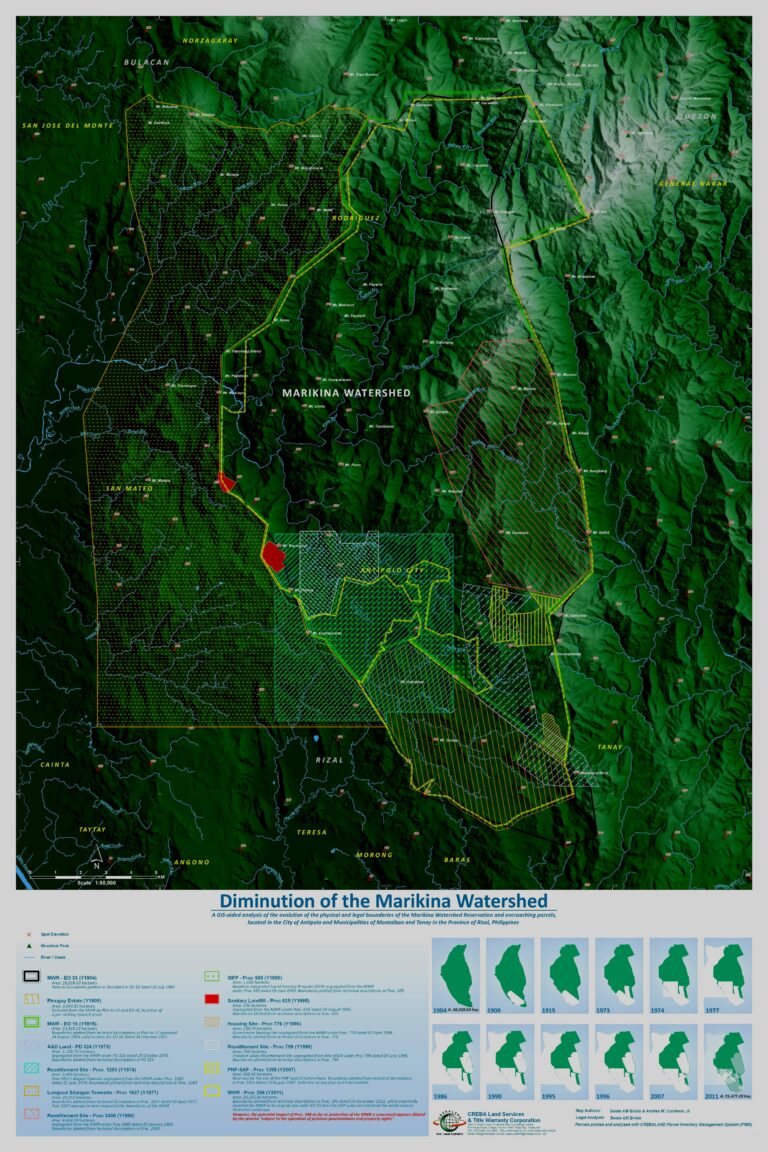 For over a century, the government itself – instead of zealously protecting the Marikina Watershed – has actively paved the way for its gradual demise. The recently maligned mining agreements allegedly allowing quarry operations within its boundaries are but recent examples of this long-standing apathy.

Successive governmental acts in the past decades considerably diminished the land area reserved for the watershed, allowing the conversion of larger and larger portions of a once lush forest into a suburban concrete-and-tin jungle, croplands and barren land.

A veritable Eden once, environmentalists and concerned citizens now decry the watershed’s desolate state, citing this as the cause of the catastrophic inundation of Metro Manila during typhoons Ondoy and Ulysses.

Government culpability is quite evident in a time-lined map study undertaken by CREBALAND in 2012.

A bit of history

The Marikina Watershed Reservation was established by Civil Governor Luke E. Wright under Executive Order (EO) No. 33 dated July 26, 1904, with an area of 100 square miles (25,900 hectares).

In 1915, the area was reduced to 24,820 hectares under EO 16 of Governor-General Francis Harrison. This was consequent to a successful claim of private ownership filed by the Heirs of J.R. Wilson over what was known as the Pinugay Estate.

Proc. No. 585 dated 05 June 1990 segregated another 1,430 hectares for purposes of an Integrated Social Forestry Program (ISF) site. A 2018 study published in the International Journal of Environmental and Rural Development (IJERD) indicates that ISFs are of doubtful efficacy in arresting forest denudation. It concludes that “even with the policy in place to ensure covering at least part of the land with trees, these areas are still converted into agricultural plantations as many other cultivated areas in timber land”.

Proc. No. 635 dated 18 August 1995 segregated another 106 hectares for purposes of sanitary landfill (!!). Fortunately, in 2005 the Supreme Court nullified this proclamation.

Proc. No. 776 dated 02 April 1996 segregated another 130 hectares for purposes of a housing site for employees of DENR, DILG, DECS, DOD and DOTC.

In 2011, then President Benigno Aquino III issued Proclamation No. 296 declaring the Marikina Watershed Reservation as a Protected Area pursuant to Republic Act 7586. It declared the size of the watershed to be 26,125 hectares – even more than the reservation’s original size in 1904.

Ostensibly, this proclamation places the entire expanded area under the protective mantle of RA 7586.

There is a catch, however, in the proviso it contains: “subject to the operations of previous proclamations and property rights”. This means that whatever protective measures the watershed may be entitled to under RA 7586, will only be applicable to those portions which have not already been used or developed for this or that purpose under any of the abovementioned proclamations, or which have not already been covered by titles or other tenurial instrument. This is true as well with respect to the amendatory RA 11038.

What to do with those Proclamations

A review of numerous similar proclamations show that in many instances the Executive Branch has been less than circumspect, if not downright abusive, in the exercise of its powers to reclassify lands of the public domain (e.g. forest lands).

Fortunately, as far as modification of boundaries of designated protected areas is concerned, such power is now reserved exclusively to Congress, by virtue of RA 11038. This means that the Executive Branch will no longer be able slice off more of the watershed’s land area.

Unfortunately however, nothing much can be done about those former portions of the watershed where private rights have already vested by virtue of the proclamations, except for the local government to impose and enforce land use restrictions pursuant to its powers under the law. In this regard, RA 11038 provides that the exercise of pre-existing property and private rights over protected lands shall be “harmonized”, as far as practicable, with the provisions of said law.

What to do with those MPA's

The strident calls for revocation of the offending MPSAs is not just an emotional outburst that should be placated by temporary suspensions and so-called investigations.

If the authorities are truly sincere about restoration, a total and permanent stop to quarry operations – whether or not covered by MPSAs – is an indispensable first step. For, of what use would plans or attempts at rehabilitating the watershed be, when the ground on which to plant trees is fast disappearing?

MPSAs covering designated watersheds or protected areas are contrary to law; and thus, under the Civil Code, are null and void from the beginning. As such, there should be no bar to outright revocation or cancellation by whichever authority approved them – be it the Office of the President, DENR or LGU – subject of course to due process requirements.

Otherwise, nothing should prevent concerned parties from suing for permanent injunction – as what the Province of Rizal, together with concerned citizens, did in the case of Province of Rizal vs. Executive Secretary & DENR – the case that shut down the sanitary landfill within the watershed in 2005.

Restoring the MWR
(or what's left of it)

As early as 1996, the Japan International Cooperation Agency (JICA) formulated a comprehensive master plan for the rehabilitation, development and conservation of the watershed. This was reportedly accepted by the DENR, which expressed intention to request assistance from the Japan Government in implementing the plan. Whatever happened to this very well-studied and well-crafted plan is unclear.

In 2015, the DENR embarked on a foreign-assisted project to formulate a plan for the watershed. The output, entitled “Integrated River Basin Management and Development Master Plan for Marikina River Basin”, appears anemic compared to the JICA plan, even as its implementation status is also unclear as of this writing.

A recent study by Mediators Network for Sustainable Peace (Mednet) reports that there are several initiatives being implemented by the Rizal provincial government, NGOs, concerned groups and the DENR toward protecting the watershed.

However, according to the study, these initiatives face major challenges: changes in political leadership, lack of long-term plans, lack of funds, corruption, boundary disputes between LGUs, and LGU-DENR-NCIP recurring issues.

In the face of all these, perhaps the 1996 JICA master plan needs revisiting. Or perhaps it is time to involve private enterprise – subject to strict criteria – via an Integrated Forest Management Agreement (IFMA) or some other applicable development-cum-protection instrument.

If the government can no longer be relied upon to protect the watershed, perhaps a private entity operating on sound business and moral principles can fill the gap.

For over a century, the government itself – instead of zealously protecting the Marikina Watershed – has actively paved the

OVERVIEW: Accounting is essentially the process of keeping records of all financial transactions of an entity, and generating various reports

There is no question that the need for affordable housing in our urban centers is rising, while many of our

There is wide industry consensus that housing, along with tourism, constitutes a powerful engine of growth for the national economy.

Manila Bay: beyond the cleanup

The recently launched cleanup of Metro Manila’s “toilet bowl” has been long overdue. It actually would not have been needed

Urban Planning and the Environment

The calamities of the recent weeks brought about by heavy monsoon rains wrought considerable havoc to lives, properties and industries